By now, the Occupy Wall Street movement has become well known and widespread throughout in the United States. Claiming, “We Are the 99%,” this resistance movement seeks to “empower real people to create real change” in order to build a better society free of the “greed and corruption of the 1%.” They have also expanded outside of New York to cities throughout the country. 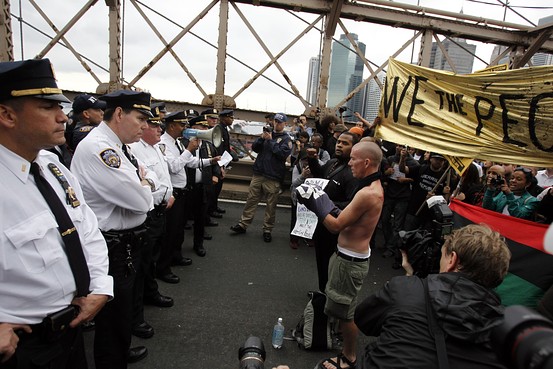 The participants utilize twitter as a free and broadly reaching outlet for discussion, announcement, and alerts. The movement’s official website endorses the twitter handle @OccupyWallSt to send out information. For instance, on Wednesday, March 21, 2012, @OccupyWallSt tweeted out a warning:  “#NYPD gathers around #UnionSq, lights-blazin.’”
In the wake of the arrests of hundreds of occupiers for lower level charges, such as disorderly conduct,prosecutors have begun to use occupiers’ twitter handles against them.  Prosecutors are using occupiers’ tweets to establish “intent to break the law.” This element has previously been an issue for prosecutors to establish prior to the subpoenas because of the group nature of the arrests.
Recently, Jeff Rae was arrested during a large march in New York City. After his arrest, Rae pledged to fight the charges of disorderly conduct believing he had a claim for entrapment. However, when prosecutors subpoenaed his twitter account, they found a tweet from Rae during the march that said, “I will tweet until I’m cuffed ;).” Threatening to use this tweet to establish Rae’s intent to break the law, prosecutors convinced Rae to accepted a plea bargain instead of fight the charges. Rae describing the experience as “fighting the king . . . it seemed like a lot of power was in their hands.” The plea bargainallows the charge to be expunged as long as Rae does not cause problems over the next six months.
In the case of Malcolm Harris, arrested on the same day as Jeff Rae, prosecutors claimed that Harris’s tweets that day “made clear…that he was well aware of the police instructions that day, and acted with the intent of obstructing traffic on the bridge.” He has not yet expected a plea bargain.

“Threatening to use this tweet to establish Rae’s intent to break the law, prosecutors convinced Rae to accepted a plea bargain instead of fight the charges.”

Currently, the New York Police Department is investigating another tweet that stated “We wont make a different if we dont kill a cop or 2.” The tweet alleged came from a man in Florida watching an Occupy demonstration that ended in a clash between demonstrators and police in Zuccotti Park.  For obvious reasons, this tweet caused an uproar in the New York Police Department, which immediately began a search for the author of the threat. The alleged perpetrators says the tweet is unrelated to the protests and defended the statement claiming, “It’s not like I meant anything of it. Who takes anything like that seriously? I’m in Florida, what am I going to do?”
Attorneys for the occupy protesters argue that the subpoenas are “heavy-handed” and “overkill.” Harris’s attorney, Martin Solar, even described the prosecutor’s attempts as “an attempt by the DA’s office to use a sledgehammer to squash a gnat.” He has motioned to have the Harris’s subpoena removed in order to protect his client from this attack on his right of free speech.
Occupiers have described the subpoenas as “a chilling effect on our free speech rights and the waste of taxpayer money to peruse individual’s public and private communications.” However, they claim the threats and subpoenas will not stop their efforts.